React, Axios and Redux: Asynchronously Fetch and Save Data to Local Storage 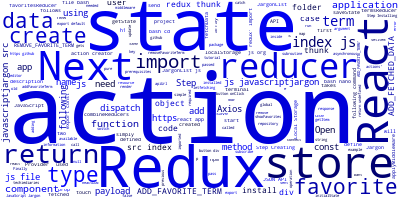 In this tutorial, we'll learn about many of Redux concepts by creating a simple React application from scratch using React, Redux and Axios to asynchronously fetch and save data to Local Storage.

For our demo application, We created a statically generated JSON API from the Simplified JavaScript Jargon GitHub repository.

Note: If you are consuming any other resource, make sure you have CORS enabled so the browser doesn't disallow reading the remote resource due to the Same Origin Policy.

The app will also include a favorites page where you can add and delete your favorite JS terms from the jargon.

These are the steps of our tutorial:

Redux is an implementation of the Flux pattern - An application architecture for building user interfaces which are created and used by Facebook.

Redux is a library for managing the state of your application which is usually used with React, but it can also be used with other libraries and frameworks. It works by using a global state store common between all the components of the application.

Redux is a good solution for medium and large apps which can help you handle complex state management requirements. But it's not needed in every use case.

For example, if you have components with many children and you want to pass state down the children tree, you can use the React Context API for accessing state in any component at any level without passing state to components that don't actually need it just because it's needed by a child component.

For more information, read You Might Not Need Redux by Dan Abramov, the creator of Redux.

We will need a few prerequisites for this tutorial, such as:

If you have the previous prerequisites, let's get started with the first step where we'll install the create-react-app utility and create a React app.

In this step, we'll install the create-react-app utility, next we'll proceed to initialize our React project.

Note: You may need to add sudo before your command in Linux and macOS or use a CMD with administrator access if you want to install packages globally on your system. You can also simply fix your npm permissions.

At the time of this writing create-react-app v3.1.1 is installed.

Now, we are ready to create our React project. Head back to your terminal and run the following command:

Next, navigate inside your project's folder and run the following command to start the local development server:

Your application will be available from the http://localhost:3000 address.

In the next step, we'll install Axios, Redux, react-redux and redux-thunk.

In the previous step, we have created our React project and served it locally. In this step, we'll install Axios, Redux, its React bindings and also redux-thunk.

Open a new terminal, navigate inside your project's folder and run the following command:

Redux-thunk is a middleware that extends Redux to let you write asynchronous logic that interacts with the store. For example for fetching data from remote resources.

Next, we also need to install Axios:

Actions are payloads of information that send data from your application to your store. They are the only source of information for the store. You send them to the store using store.dispatch().

Actions are plain JavaScript objects that must have a type property which indicates the type of the action being performed. For example in our case, we can create an action of type ADD_FAVORITE_TERM:

In most cases, an action can also include data:

In this example, the event name is ADD_FAVORITE_TERM and the data is the name.

Inside the src folder, create a folder called actions:

Next, navigate inside the actions folder and create a types.js file:

Next, add the following constants and save the file:

Next, create an index.js file inside the actions folder:

Next, start by adding the following code to the index.js file:

We imported our ADD_FETCHED_DATA, ADD_FAVORITE_TERM, and REMOVE_FAVORITE_TERM action types that we previously defined in the actions/types.js file. We also imported the axios client and defined the apiUrl constant variable which holds the URL of our JSON API.

Next, in the same actions/index.js file define the two following methods:

Action creators are simply functions that create and return actions.

We first defined the addFavoriteTerm() function that creates and returns an action of the ADD_FAVORITE_TERM type and provides the action with a data payload comprised of the name and description, passed as an argument to the function, of the JS term that users are adding to their favorites.

Next, we defined the removeFavoriteTerm() function that creates and returns an action of the REMOVE_FAVORITE_TERM type and name payload which refers to the name of the JS term that users want to remove from their favorites.

Now, we need to define a function that fetches data from the JSON API and dispatches an action of the ADD_FETCHED_DATA type with the fetched data as the payload as follows:

Notice that this function is different from the previous functions (action creators) because it performs an asynchronous operation and returns a function, instead of an object, which has a passed dispatch argument.

This function is called a thunk action creator.

A thunk is a subroutine used to inject an additional calculation into another subroutine. Thunks are primarily used to delay a calculation until its result is needed, or to insert operations at the beginning or end of the other subroutine. They have a variety of other applications in compiler code generation and modular programming.

In the fetchData() thunk, we first return a function that takes a dispatch argument. In the body of the returned function we call the get() method of the axios client for sending a GET request to our JSON endpoint. Axios returns a JavaScript Promise which gets resolved with the fetched data or rejected with an error.

If the Promise is successfully resolved, we send an action of the ADD_FETCHED_DATA type, along with the data fetched from the API as the payload, to the store using the passed dipatch() method.

An action creator can return a function instead of an action object thanks to the Redux Thunk middleware which comes from the redux-thunk package we previously installed and which we'll add later to our Redux store.

That's all we need to define our actions. In the next step, we'll see how to use reducers to change the state of the application after dispatching actions.

In this step, we'll see what a reducer function is and we'll add reducers to our application.

Reducers are pure JavaScript functions that are used to set and update the application's state in response to actions sent to the store.

Before writing the reducers, it's essential to think about the shape of your application's state.

Redux stores the whole state as a single JavaScript object, so you'll need to know the attributes of that object so you can write the required reducers. In our case, we need to store the following things:

Head back to your terminal and, inside the src/ folder, create a reducers folder and navigate to it using the following commands:

Next, create the index.js, termsReducer.js and favoritesReducer.js files using the following commands:

Next, open the reducers/favoritesReducer.js file:

And add the following code:

Again, we import the ADD_FAVORITE_TERM and REMOVE_FAVORITE_TERM action types, next we define and export a pure function that takes the old state and an action, and returns a new state depending on the action.

We have now created reducers for mutating the various pieces of the global state of our application. We need to combine these reducers into one reducer using the combineReducers() method. Open the reducers/index.js file:

The combineReducers() generates a function that calls the required reducer for each slice of the state, and combines their results into a single object.

For more detailed information about reducers, make sure to read this page of the official docs.

In the next step, we'll see how to configure the Redux store in our application.

Now, that we have defined the actions and reducers in our application, we need to create the store.

Next, start by adding the following imports:

Next, create the store as follows and send the action for fetching data from the JSON API:

First, we created the store and applied the redux-thunk middleware to the store which allows us to support asynchronous actions in Redux.

Next, we dispatched our first action for fetching data from the server and storing it in the store.

Next we need to pass the store to the components. In the same file, wrap the App component with the Provider component as follows:

We pass the store as a prop to <Provider>.

In the next step, we'll see how to create a React component for displaying our data.

In this step, we'll create a JargonList component for displaying the list of JS terminologies that you have consumed from the API. We'll also display the favorite terms selected by users in this same component and use conditional rendering to switch between the lists of terms and favorites.

Head back to your terminal and create a JargonList.js file in the src/ folder of your project:

Next, start by adding the following imports:

Next, define the following method which will be used to map the state from the Redux store to the component props:

Next, let's create the component as follows:

Next, we need to define the following two methods in the JargonList class to toggle between the jargon and favorites views:

Finally, we need to connect the component to the Redux store and export it:

Next, open the src/App.js file:

Next, update it as follows:

We simply included our JargonList component in our App component so it gets rendered when the app is started.

Next, we'll see how to persist the favorite terms using localStorage.

In this step, we'll add support for storing the favorite JS terms added by the user using the local storage of the browser so they can be persisted between app refreshes.

Next, let's implement the following changes.

First, you need to define these two methods:

The saveState() function takes a state object and save it in localStorage, if the favorites array of the state object is not empty, using the setItem() method which takes a "state" key and a string representing the state after we converting it from a JavaScript object to a string using the JSON.stringify() method.

The getState() function gets the state from localStorage using the getItem() method for retrieving the stored string and the JSON.parse() method for converting it back to a JavaScript object.

Finally, we need to retrieve the saved state from localStorage and pass it as the initial state of the store:

This way when the user visits the app again, the store will be initialized of the favorites data from localStorage.

Finally, we need to subscribe to the Redux store and call the saveState() function with the user favorites whenever an action is dispatched.

This way, when we send an action to add a favorite or remove a favorite from the store the corresponding local storage will be updated.

This is the full code of the src/index.js file after these updates:

In this tutorial, we've seen step by step how we can build a React application and manage its state using Redux.

You can find the source code of this application from this GitHub repository.

You can find more details from the official docs of React and Redux.