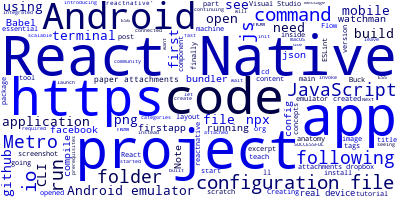 After introducing React Native and seeing all the required prerequisites for creating a mobile application with React Native, let's now see how to create our first project from scratch.

Open a new terminal and run the following code to invoke the React Native CLI using the npx command:

Note: Before continuing, you should, by now, have started your Android emulator or connected a real device to your machine.

Next, start the Metro Bundler using the following commands:

You need to leave Metro running. So open a new terminal and run the following commands to compile and launch your application in the Android emulator:

The run-android command will compile and install the app in Android.

Note: If you are under a macOS and you want to install the app in an iOS emulator or real device, you need to use the react-native run-ios command instead.

You need to wait for your app to be built. You’ll finally get the BUILD SUCCESSFUL message in your terminal and your app should be opened in the emulator or a real device if attached.

This is a screenshot: This is a screenshot of our app running inside an Android emulator: As, we previously mentioned, if you have Android SDK Platform Tools v29, you may get adb: error: cannot bind listener: Operation not permitted. In this case, you need to downgrade to v28. Refer the previous Testing on Android and Ubuntu 19.04 section.

After running your app inside the Android emulator. Run the following command to open the project in Visual Studio Code from your project’s folder: The anatomy of a React Native project

In the left panel, we can see the structure of our project. It includes the typical folders and configuration files for a Node.js project such as the package.json and package-lock.json files and the node_modules folder. We have also other configuration files such as:

We have the following folders:

We have the following JavaScript files: