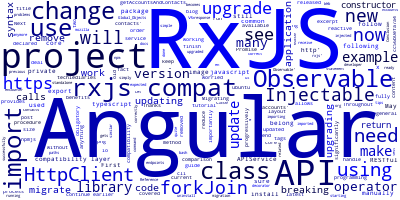 Angular 6 was released in May 2018 and It's updated to use RxJS 6 -- the library for reactive programming. RxJS 6 has many breaking changes in comparison with RxJS 5.5 and earlier versions.

To continue with our Angular 6 upgrade guide we'll now see how to deal with RxJS API calls and how to migrate your application from RxJS 5.

The general procedure of upgrading from RxJS 5.x to RxJS 6 is as follows:

Using rxjs-compat for Compatibility with Angular 4|5

If you are upgrading your Angular 4|5 project to Angular 6 which makes use of RxJS 6 you may be worried about the breaking changes with RxJS 5 used in your current project. But you don't have to be! Thanks to rxjs-compat a library that provides a compatibility layer for RxJS 5.x so any RxJS Observables that you are using in your Angular 4|5 project will still work without doing anything else. In fact when run ng update @angular/core will install rxjs-compat for you so you don't have to do it manually.

There many changes in RxJS 6. Many methods belong to the Observable class are removed so most of the migration problems you'll encounter are related to imports i.e you only need to change imports to the correct paths and APIs.

When you are ready to upgrade your Angular project to use the new RxJS 6 APIs you can follow the following tips and examples.

Let's see a simple example of an Angular 4|5 class that makes API calls to a RESTful API using the HttpClient and RxJS 5 Observables.

In the example we've starting by importing HttpClient and the Observable class from rxjs/Observable. We then declared an Injectable class or service using the @Injectable decorator.

In the constructor of the service, we've injected HttpClient and then declared a method that gets Accounts and Contacts from the RESTful API endpoints and used the forkJoin operator from the RxJS library to return an Observable when we receive a response from both API GET calls. It's quite similar on how you would use Promise.all.

Now to migrate this code to use RxJS 6, you only need to change the import statement for the forkJoin operator so our previous example becomes:

The forkJoin operator doesn't belong anymore to the Observable class. It's now a standalone operator that can be imported from rxjs.

After updating your Angular project to use RxJS 6 new syntax you need to remove the rxjs-compat library from your project. You can do that by simply running the following command: