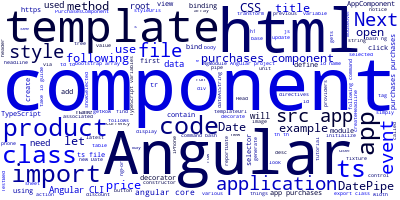 This tutorial will walk you through the process of learning about Angular 9/10 components via hands-on experience.

Take a look at what we will be studying throughout this post before we get started with the examples:

Before we get started with this guide, we need to have the following prerequisites:

What is an Angular Component

Simply described, an Angular component is a component that controls a portion of the user interface (UI) of your application. Components may include things like the header, footer, and even the complete page. This may vary depending on how much re-usability you need in your code.

When it comes to code reuse and structure, components are essential!

Technically, an angular component is a TypeScript class decorated with the @Component decorator which is a part of the Angular core.

A component has also one or more associated style-sheet files used for adding styles to the component view. These files can be in many formats like CSS, Stylus, Sass or Less.

The template associated with an Angular component has access to various directives such as ngModel, ngClass, ngIf, ngFor, etc.

The component TypeScript class provides the data and business logic that will be available to the template via data and method bindings that can be applied to the HTML elements in the template.

In nutshell, these are some facts about components:

You can define an Angular component using the @Component decorator with a TypeScript class.

If you don't have Angular CLI 9 installed, open your command-line interface and run the following command:

This will install @angular/cli version 9 in your terminal.

The Anatomy of an Angular Component by Example

Head back to your Angular 9 project, open the src/app/app.component.ts file, you should find the following code:

In this file, we export the AppComponent class, and we decorate it with the @Component decorator, imported from the @angular/core package, which takes a few metadata, such as:

An Angular 9 application is composed of a tree of components, in which each Angular component has a specific purpose and responsibility.

A component is comprised of three things:

Currently, our app has three components:

Most work you do with Angular relates to components. Basically an Angular application is a tree of components with a root component.

A component controls a part of the web application screen. It consists of JavaScript (or precisely TypeScript) code, HTML code and CSS. If you are familiar with the MVC (Model-View-Controller) architecture or design pattern, each component actually uses the same architecture: the component's code represents the controller and the HTML code (with CSS) represents the view.

How to Create an Angular 9 Component?

You can create a component in Angular using the @Component() decorator which can be imported from @angular/core.

You simply decorate a TypeScript class with the @Component() decorator that takes information about the HTML view to use for the component and the CSS styles. For the code which controls the component, it's encapsulated inside the class.

Here is an example of a simple Angular 9 component

This component can be called in your HTML code just like any standard HTML tag, i.e:

The result will be: Hello Angular.

In src/app you can find various files for the root component of the application.

You can also find the app.module.ts file, which is used to define an Angular module.

A root component is the first Angular component that gets bootstrapped when the application runs. Two things are special about this component:

First, if you open the application module file src/app/app.module.ts:

You'll notice that, it's added to the bootstrap array of the module definition.

You'll notice that, it's called inside the document <body> tag.

Starting with the application root component, all the other child components (the tree) will be loaded.

First we import the Component class from @angular/core. Then we use it to decorate the AppComponent class which transforms it to a component. The component decorator takes these information:

The AppComponent has a variable title which has a string value. If you look in the component HTML template src/app/app.component.html:

You can notice that we are using the curly braces `` to display the value of title. This is what's called data binding (we'll look at the concept in depth in next tutorials).

You can create a component by manually creating the necessary files or you can also use the Angular CLI to automatically generate the bare minimum code for a a basic component. The Angular CLI takes care, also, of adding the component to the module definition.

To generate a component with the Angular CLI just run the following command:

You can find the available options from the docs.

Next, let's define some TypeScript variables and methods in our Angular component. Open the src/app/purchases/purchases.component.ts file and add the following variables:

Next, define the following method:

This method makes use of the date pipe so you need to import and inject it via the component constructor:

You also need to import and add DatePipe to the providers array of the app module to which our purchases component belong.

Open the src/app/app.module.ts file and update it as follows

Next, go back to the src/app/purchases/purchases.component.ts file, you need to invoke the createHeadline method in the ngOnInit life-cycle event of the component to ensure it will be called when the it's initialized:

Next, open the src/app/purchases/purchases.component.html file and update it as follows:

Next, open the src/app/purchases/purchases.component.css and add these CSS styles:

After implementing our component, we can proceed to write the unit tests.

Open the src/app/purchases/purchases.component.spec.ts file and add the following code for unit testing the Purchases Component:

Finally, you can start your Angular 9 app using the following command:

You can use Angular bindings to bind TypeScript variables and methods declared in the component's class to the component's template. You can also use built-in or custom directives to in your templates.

Let's see how to create these bindings and directives by example, First, we need to define the various TypeScript variables of string, number, date, and array and then we'll use some Angular syntax to bind them with elements in our template.

Go to the src/app/purchases/purchases.component.ts file and add the following code:

We'll also see how to use the built-in date pipe i.e DatePipe to format dates. So you need to import it using TypeScript' import statement as follows:

Next, you need to inject via the class's constructor as follows:

Now, let's bind our TypeScript variables in the template. Head to the src/app/purchases/purchases.component.html file and update it as follows:

We use data bindings to display the values of our TypeScript variables in our template. We also use the builtin Angular currency pipe i.e CurrencyPipe to display the currency next to price and total price of products.

Angular provides one way bindings i.e to exchange data from the templates to components you need to bind TypeScript methods defined in the components' class to DOM events in templates.

There are may types of events that can be triggered by users in the templates such as click, change, and select events. Let's start by listening for a click event from a button.

On the src/app/products/products.component.html file add the following code:

Next, in the src/app/purchases/purchases.component.ts file and add the following method:

If you click the button, the actual date on your machine will be displayed on your Angular template.

Let's see another example of the click event binding. In the template change as follows:

Next, In the component's class, add the following method that will be bound to the click event of each table row:

Next, let's bind an action to the mouseover event of each row table. Simply add the following code:

Next, in the component's class, define the selected string variable and showSelected() method that will be invoked when the mouseover event on the row table is fired. We'll simply show the corresponding row in the template via the selected variable: