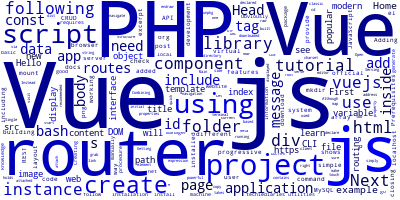 In this tutorial, you'll learn how to use Vue.js in/with PHP in your web project(s). Vue.js is a popular progressive library for building modern user interfaces using features like components and virtual DOM.

Using PHP and Vue.js in your project requires you to have a a few prerequisites.

Other than that, you are good to go!

You'll not be using any CLI utilities to generate your project in this tutorial so you'll have to manually create a directory structure for your project. Head over to your terminal and create the following folder:

Next, navigate inside of it and create a js folder:

The Vue.js docs shows different ways to get and include Vue.js in your project(s), such as:

Although, it's recommended to use Vue CLI for working with Vue.js you will not be using it in this tutorial. Instead you'll use the classic way of including JavaScript files i.e via the <script> tag.

First, get the Vue.js library from: vuejs.org/js/vue.js and copy it into the js/ folder of your project (make sure you create one first!).

Inside your project's root folder, create an index.php file using the following command:

Open the index.php file with your code editor and add the following initial content:

You are simply including Vue.js library from the js/ folder of your project.

Next, you need to add a <div> where you can mount your Vue.js application:

Now, before the closing </body> add the following script to create a Vue.js instance:

The Vue instance takes an object that contains the following properties:

Next inside the <div id="app"> add the following expression to display the message variable declared in your Vue instance:

Using the PHP built-in development server, you can serve your project by running the following command:

This will start the server from localhost:8080. If you visit this address with your browser you should see the Hello Vue from PHP! message displayed in your page.

Adding Routing with the Vue.js Router

Vue.js provides a powerful client side router to create routing and navigation in your Vue app. Combining the router with Vue components, you can create modern Single Page Applications with Vue and PHP.

Before you can use the Vue Router, you need to download it, next you can create Vue components and map them to different routes. The router will display the right component based on your current browser's URL.

Let's see a quick example of using PHP with Vue.js and Vue Router.

First grab the Vue router from this link.

Next, include the router library after the Vue.js library:

Next, inside the <script> before the closing </body> tag, create two Vue.js components:

You use the template property to add a template for the component. Next, define a routes array with the following objects!

Next, create a Router instance and pass in the routes array:

Finally, create a Vue instance and provide the router instance:

That's it, you have added routing with the Vue.js router in your simple PHP application.

In this tutorial, you've seen a simple example of how to use Vue.js in a PHP application. This was mostly about Vue.js code that PHP but this shows how to include Vue.js in PHP. In the next tutorial, you'll see how you can send data from a a Vue.js interface to a PHP back-end and how to consume and display data from PHP in your Vue.js application.