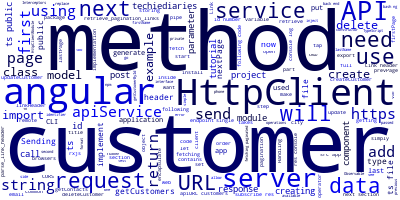 Throughout this tutorial, you'll learn, by example, to use Angular 7/8 and HttpClient to send HTTP requests or make API calls to RESTful endpoints of remote servers in order to fetch data.

You can use the example code to either send requests to third-party API servers, provided that they have CORS enabled or to your back-end server as a part of a full-stack web application that has a client and server tiers.

To be able to complete this tutorial, you first need to have a few requirements:

You also need to have the Angular CLI 8 installed:

You may need to add sudo on debian-based systems or macOS to install packages globally.

If you don't have an Angular 8 project, you need to generate one using the following command:

The CLI will prompt whether of if you want to add routing or not and which CSS format you want to use. Choose whatever works for you then press Enter.

Wait for the CLI to generate the project files and install the required dependencies then you are good to go!

Angular is a complete platform for creating client side mobile and desktop apps. As such, you don't have to use other external libraries for doing common operations like HTTP requests.

In web browsers you have two standard APIs for sending HTTP requests which are the XMLHttpRequest interface and the fetch() API (available only on modern browsers).

The HttpClient module is built on top of the XMLHttpRequest interface. It wraps all the complexities of this interface and provides extra features like:

In the next step, you are going to setup the HttpClient module in your Angular 8 project.

After introducing HttpClient, let's now see how you can configure it in your Angular 8 application.

In fact, you don't have to do much, you simply need to import HttpClientModule from the @angular/common/http package and include it in the imports array of main the application module.

Open the src/app/app.module.ts file and add the following code at the top of the file:

Next, include HttpClientModule in the imports array of the application module: 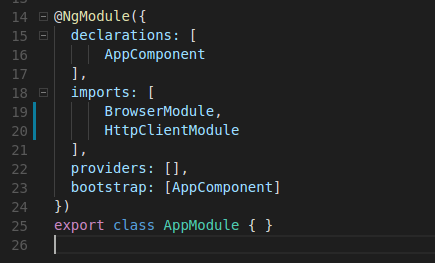 That's it! You can now use the HttpClient library to send HTTP requests to a third-party API server or to your back-end REST API server.

In the next step, you are going to create a service that will encapsulate the code that communicates with your server.

After setting up HttpClient in your project, you need to create a service which will import HttpClient and use it to send any HTTP requests needed in your application.

This service will be then injected in any component that needs to do any HTTP operations.

Go to your terminal and start by generating a service using the Angular CLI 8:

You will not add any tests in this tutorial, so all the work will be done inside the api.service.ts file.

In the example, we suppose that you have an API server that exposes an www.server.com/api/customers endpoint which returns a set of customer objects. Each customer has the following attributes:

In the next step, you'll create a model for your data (customer).

At this point, the first thing that you need to do is to create a Customer class which will be used as a type for each fetched customer object

The Customer class is called a model.

You need to start by generating the Customer model using the following command:

You can also use just g instead of generate.

This will generate the model file inside the src/app folder

For simple projects, the organization we used is OK but for big projects you may need to create a models folder where you can put your class model(s). And also use feature modules to encapsulate separate parts of your project. For example, in this project you could use a customers module that contains the API service, the Customer model and any components then import it in the main application module.

Next, open the src/app/customer.ts file and add:

The Customer class is a user-defined type that makes use of built-in TypeScript types like number and string to define a model.

You also need to export the model class using the export TypeScript keyword, because it will be imported from other classes like the API service or the components.

Next, open the src/app/api.service.ts file and import then inject HttpClient:

These are the steps, you need to do after opening the service file:

You first inject HttpClient as a private httpClient instance in the service's constructor.

You next add the apiURL string variable which stores the address of the remote API server.

In the next step, you'll add the methods for doing create, read, update and delete operations against the the www.server.com/api/customers endpoint.

After creating an Angular service and the class model and injected HttpClient into the service, you can now create the CRUD methods

Since these methods will make use of the Customer model class as a type, either for the parameters or the return results, you first need to import the class inside the service's file:

Next, you can define the following five methods for creating, reading, updating and deleting the customers:

In the next section, you'll implement all these methods one by one starting with the .getCustomers method which implements the logic for getting pages of data from the server.

The .getCustomers method will be used for fetching customers.

In a real-world scenario, you'll have to implement the logic for fetching paginated sets of data so in this example, you'll also see how to get paging information from the headers of the responses coming from the server.

For storing the paging information, you'll need to add the following variables in your service:

The prevPage and nextPage variables are constantly updated with each coming response.

In your ApiService add the following code:

Now, you are ready to implement the .getContacts method. The simple version of this method would simply be:

This will return an Observable<Customer[]> that you need to subscribe to, in your components, in order to fetch the customers data from the server.

We use the TypeScript ${} string interpolation operator and back-ticks to format the endpoint URL.

I you want to fetch the pages of data, provided that your server is implementing pagination using Link headers, you need add the following code instead:

Let's explain this code. You pass an optional url parameter to the method then inside the method body, you check if the url was passed:

This way, you can use the .getContacts method to firstly get the first page of data and then to get the next pages by providing the URLs of previous and next pages that you initially retrieve from the first received response.

Now, you need to pay attention to two things:

Next, you need to implement two methods in your service that will be used to retrieve pagination links:

This is the implementation of the .parse_link_header method:

This is the implementation of the .retrieve_pagination_links method:

That's it. You have completed the implementation of the .getContacts method.

In the next section, you'll implement the method for getting a single customer by id.

Fetching a Single Object by its Identifier

In this method, you simply format the URL to a single customer by its id.

In the next section, you'll implement the method for creating a customer on the server.

In this section, you'll add the .createCustomer method which sends a POST request to the server. It takes a parameter of type Customer:

This method calls the HttpClient.post method that takes the URL and the customer object to send to the server with a POST request.

In the next section, you'll see how to update data on the server using HttpClient.

Sending a PUT Request to the Server

This method calls the HttpClient.put method to send a PUT request to the server.

In the next section, you'll add the implementation for the last method that will be used to delete data from the API server.

Sending a DELETE Request to the Server

The last method that we need to create is the .deleteCustomer method which deletes a single customer by its identifier:

This method sends a DELETE request to the server using the HttpClient.delete method which takes an URL parameter that points to the resource you want to delete.

After creating the Angular service that encapsulates all the methods to send HTTP requests to the API server. Now, let's test these methods with a simple example. Keep in mind that you need to have an HTTP server with an /api/customers endpoint.

If you have that, open the src/app/app.component.ts file and start by importing ApiService then inject it in AppComponent:

Next, add the following code inside the .ngOnInit life-cycle method:

The first call to the .getCustomers method retrieve the first page of data and returns an Observable. You need to subscribe to it in order to send the actual request to the server.

Once the first response is received, you can get the URL of the next page of data from apiService.nextPage variable and use it as a parameter to the second call of the .getCustomers method to retrieve the second page and so on.

Next, create a customer object:

And use it to create a customer on the server:

You can also update the customer using the following code:

Finally, you can delete the customer by its identifier using:

Remember that API calls are not sent to the server unless you are subscribed to the Observable returned from these methods.

In this tutorial, you've learned to use Angular 7/8 and HttpClient to send HTTP requests to the server.