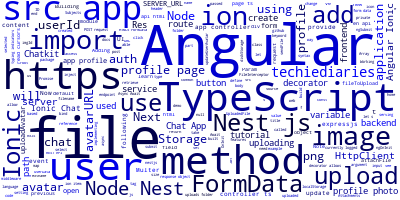 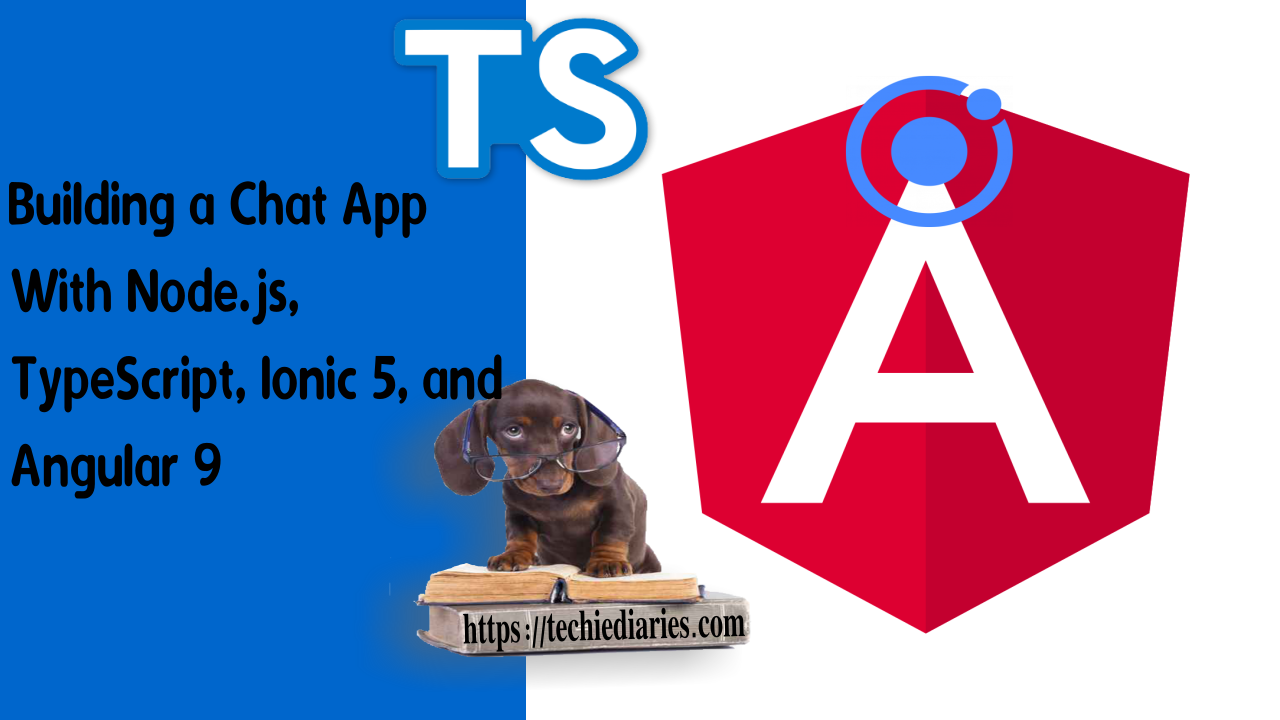 In this tutorial part, we'll learn to customize/upload user profile photos. We assume no previous knowledge of TypeScript which is the programming language used in both Ionic/Angular and Node/Nest.js used to build both the front-end and back-end of our chat application. We'll be also explaining basic concepts such as imports, decorators, Async/Await and HTML5 FormData.

These are all the tutorial parts:

If you are a TypeScript beginner, you'll also learn throughout this tutorial how to use basic concepts of the language such as:

You'll learn about new concepts in Node/Nest.js, Angular and Ionic.

Before getting started, let's see a summary of what we are going to learn throughout this tutorial. We'll learn about:

This tutorial is based on the Angular 9 and Ionic 5 application we’ve built in the previous series. You can get the source code of this part from this GitHub repository.

Note: Chatkit is the hosted chat service provided by Pusher which is now retired. You can either use your own hosted chat server with an open source solution like https://chatsdk.co/ which is based on Firebase or use PubNub Chat, an alternative service for Chatkit.

In the previous tutorials, we’ve started building a mobile application with Ionic 5 and Angular 9 on the frontend and Node Nest.js on the backend. For chat features, we’ve used Pusher Chatkit which provides out of the box chat features commonly used in most popular chat apps. We’ve added features like typing indicators and file attachments. Now, we’ll proceed with our demo application by implementing other functionalities such as read cursors and profile photos.

Note: You can read the previous tutorials where we’ve built our demo chat application from these links:

TypeScript provides various ways for imports. When the module exports an object with properties, you can use the import * as mymodule from "mymodule"; syntax or or pick the names you want to import using import { symbol } from "mofule";

Both Angular and Nest.js are based on TypeScript so you'll be using the same import syntax for importing the built-in APIs of the frameworks before you can call them in your code.

Most chat applications provide a way for users to add a profile photo. Chatkit allows you to assign profile photos to users but doesn’t provide storage so you need to upload images to your own Node/Nest.js server.

Node Nest.js uses the multer middleware for supporting file uploading. The middleware can be configured and adjusted depending on your requirements.

Note: Multer is a middleware that works only with the multipart/form-data encoding type, which is primarily used for uploading files.

You can upload a single file by using the FileInterceptor() and @UploadedFile() decorators, and you can then access the file from the file property in the request object. Let’s see this by example.

Open the src/auth/auth.service.ts file and add the following method:

This TypeScript method will be used to update the user avatar. It simply calls the updateUser() method available in the chatkit instance which takes an object that provides the ID of the user and the avatar URL.

Next, open the src/app.controller.ts file and add the imports for the Get, Res and Param TypeScript decorators from the @nestjs/common package:

Note: the other symbols are already imported from the previous tutorials.

Next, add the following imports which are necessary for file uploading:

Next, import diskStorage from the multer package and extname from the path module:

Next, add the following route:

The @Get() decorator before the uploads() method tells Node/Nest.js to create an endpoint for this particular route path and map every corresponding request to this handler.

The @Param decorator allows us to get the value of the imgId parameter passed through the URL.

The @Res() decorator allows us to inject a library-specific response object. You can find more details about it from the Express docs.

The injected response object provides the sendFile() method (which is supported in Express v4.8.0+) that transfers a file at the given path (passed as the first argument) and sets the Content-Type response HTTP header field based on the filename’s extension.

Since we specified the root option in the options object (passed as the second argument), the path argument can be a relative path to the file (In our case it’s just the name of the file). In our example, the file will be transferred from the uploads folder.

This route will allow our Node/Nest.js application to serve static files from an uploads folder.

Now, let’s test if our application is serving files correctly. In the root folder of your Node server, create an uploads folder:

Next, add the default user avatar that we used before from the https://image.flaticon.com/icons/png/128/149/149071.png link in the uploads folder (save it as avatar.png).

Next, open the src/app/auth/auth.service.ts file, locate the createUser() method and change the default value of the avatarURL variable to point to our avatar.png image in our server:

Now, we are serving the default avatar from our server.

At this point, if you test both your frontend and backend apps, you should be able to see the default avatar assigned to new users in your application:

Now that we are able to serve static image files from our backend application, let’s add the route for allowing users to update their profile photos.

Open the src/app.controller.ts file and add the following route:

This allows you to send a POST request to the 127.0.0.1:3000/avatar endpoint from the frontend application to update the profile photo.

Also in your controller add the TypeScript SERVER_URL variable which holds the address of your server:

Adding the Profile Page in the Angular 9/Ionic 5 Frontend

After implementing file uploading in the backend, let’s now add a profile page in our Angular 9/Ionic 5 application which allows users to upload their profile image avatars to the server.

Open a new terminal and navigate to your frontend folder using:

Next, generate a new Ionic page using the following command:

This will create a src/app/profile folder with the necessary files and add a profile route to the src/app/app-routing.module.ts file:

Next, open the src/app/home/home.page.html file and add a button that will take us to the profile page just below the START CHATTING button:

This is a screenshot of the UI:

Next, open the src/app/profile/profile.page.html file and update its content with the following code:

We create an Angular form and we bind the ngSubmit event to an uploadAvatar() method that will be called when the users click on the submit button. The uploadAvatar() TypeScript method takes a reference to the form created using an Angular template reference variable (#f="ngForm").

We also bind an attachFile() TypeScript method to the change event of the file input tag which will be called when the user clicks the Choose File button and select a file.

Next, we need to define the uploadAvatar() and attachFile() TypeScript methods. Open the src/app/profile/profile.page.ts file and start by adding the following imports:

We import HttpClient for sending POST requests to the server and the Ionic Storage service for working with local storage.

The fileToUpload variable will hold the selected image file that will be uploaded to the server.

Next, inject the HttpClient and Storage services via the constructor:

Next, we need to retrieve the ID of the currently logged in user from localStorage in the ngOnInit() life-cycle method of the page:

We simply call the get() method of the Storage service to retrieve the USER_ID and assign it to the userId variable we defined earlier.

Note: Make sure to add the async keyword before the ngOnInit() method to be able to use the await keyword in the body of the method.

Next, we define the attachFile() method:

This method will be called when the user selects a file. If a file is selected it will be stored in the fileToUpload variable we defined earlier.

Now that we have added the code to retrieve the user identifier from the local storage and select the file from the user drive, let’s add the method that uploads the file to the Node server from Angular with FormData along with the currently logged in user using Angular 9 HttpClient and HTML5 FormData:

Here is the definition of FormData from Mozilla docs:

The FormData interface provides a way to easily construct a set of key/value pairs representing form fields and their values, which can then be easily sent using the XMLHttpRequest.send() method. It uses the same format a form would use if the encoding type were set to "multipart/form-data".

That’s it we are finished with this part dealing with updating the user avatar. This is a screenshot of the profile page after we uploaded a new avatar for the currently logged in user:

In this tutorial, we’ve seen how to upload and serve user avatars in our Ionic 5, Angular 9 and Node/Nest.js chat application and we also implemented chat read cursors that show users the position of the latest message they have read and the count of their unread messages in the room. You can get the source code from this GitHub repository.