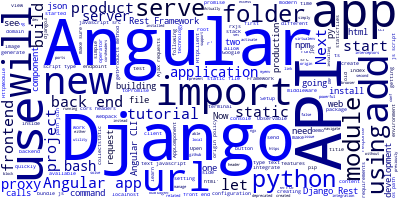 In this tutorial we are going to learn how to get started building modern web applications with Python, Django and Django Rest Framework as the back-end stack and the new Google Framework, Angular 4|5, to build JavaScript client side applications, as the front-end technology. We'll see how to integrate both frameworks in the development and the production environments and how to use the Angular HTTP module to make API calls or Ajax requests to our REST API back-end.

This tutorial is using the old Angular HTTP client for making HTTP calls. This module is deprecated in Angular 5 and will be replaced by the new Angular HttpClient module available in Angular 4.3+ which comes with many new features such as the HTTP interceptors. The two modules have the same API interface so you should be able to easily migrate to the new one. In future tutorials we will be using HttpClient so stay tuned!

The Angular CLI is a command line utility which allows you to quickly generate and build Angular 2+ apps without the hassle of WebPack configuration. The CLI takes care of the configuration and let you focus on build your next Angular app. It's a really great utility for bootstraping modern JavaScript SPA applications using Angular.

In this tutorial we are going to see how to serve and integrate an Angular 2+ web application (as a frontend) with a Django backend.

The communication between Django and Angular 2+ happens through a Restful API, so to test if our integration works, as expected, we need to have a REST API backend.

You can use any Rest API library for Django such as the powerful Django Rest Framework (DRF) or Tastypie to quickly build your API backend.

I have previously created an API for a simple product manager app with Django and DRF so I'm going to use it in this tutorial for the integration with the Angular 2+ front-end app.

Before we can start building our demo app, there are some requirements that we need to install on our developmenet machine:

So make sure you install these requirements on your system before you can start.

Let's get started with a new Django project:

This will create a virtual environment, activate it then install Django and start a new project.

Next let's generate a new Angular 2+ application inside a sub-folder of the Django project, using the Angular CLI.

First if you don't have Angular CLI installed, start by installing it from npm with:

Then use the CLI to generate a new Angular 2+ app inside the Django project's root folder:

This will navigate to the project's root folder then use ng new command to scaffold a new Angular project.

For development we can run two local servers without any problem, one for Django using the manage.py runserver command and the other one for Angular using the ng serve command.

Actually we have a small issue that we are going to solve in two ways, either by using the Angular CLI proxy or by installing a Django package. It's related to the cross origin policy: Since we are running two development servers with different ports, the same origin policy in web browsers will block any http requests coming from our front-end Angular app to the Django API back-end.

You can simply create a proxy.conf.json configuration file then add:

Then change the npm start script (in package.json)to use a proxy with this configuration:

Now you need to use the following command to start your server (instead of ng serve):

You can read more information about proxying support in webpack's dev server from this link.

If this somehow doesn't work for you! Let's try with a second solution. This time we'll be working with the back-end:

If you send an API request from the Angular CLI server to the Django local server your browser will throw an error like this :

To get rid of this error you'll need to setup the CORS headers in your Django back-end.

Head back to your terminal or command prompt the install django-cors-headers using pip:

Next, add the app to the installed apps in settings.py:

Next, add the corsheaders.middleware.CorsMiddleware middleware:

Then set CORS_ORIGIN_ALLOW_ALL to True in settings.py:

Now the Same Origin Policy won't block the requests since an allow all origin header is present on the http responce.

You can see all available options from this link

Next you can start both dev servers in different terminals and start testing.

If you are using the first approach, make sure to only use relative urls or otherwise use the second approach.

Next let's send some requests to our Django API endpoints.

I have previously created a simple app with Django and Django Rest Framework for a products inventory manager so I'm going to use that for testing.

If you don't have an API yet, you can follow this tutorial to quickly create one.

In my case I have four endpoints

Setting Up the Angular HTTP Module

Open the frontend/src/app/app.module.ts file then import the HttpModule module from @angular/http and add it to the AppModule imports.

You are ready to use the HTTP module to send HTTP/Ajax requests to REST API servers.

Now let's see how we can use the HTTP module to make some API calls to our Django back-end:

Go ahead and open frontend/src/app/app.component.ts then add the following code:

We first start by the Http service from @angular/http and inject it in the component's constructor as http. We then add a new getProducts() method which sends a GET request to retrieve the products from the corresponding endpoint (http://localhost:8000/products).

The getProducts() method simply calls this.http.get() to send a GET request then converts the returned RxJS Observable to a promise with the toPromise() operator imported from RxJS. When the promise is resolved we simple log the response to the console after converting it to JSON.

The Angular HTTP methods return Observables by default. Just like Promises, observables are JavaScript abstractions to help developers work with asynchronous operations but they are a newer standard and have more features like multiple return values and concelation etc.

In this tutorial, we are using the old Angular HTTP module which is now deprecated in Angular 5 but you should use the new Angular 4.3+ HttpClient which is a more powerful version that has the support for HTTP interceptors and other features.

This will add a button and bind its click event to the getProducts() method.

P.S: If you get an error saying:

Just make sure to add this import:

Now you can test your API endpoint by clicking on the button. You should see the response with some data on the console.

If you have finished developing your application it's time for the production configuration where we are going to place both the Django and the Angular apps on the same domain.

In production we shouldn't use two URLs or domains. Instead we have to build our Angular app then serve it through Django in order to get everything on the same domain.

You can build your Angular web app by running the following command:

This will output the production ready app in the frontend/dist folder.

Next let's configure the Django staticfiles to serve JavaScript and CSS from the frontend/dist folder.

Open your project settings.py then add:

Next set STATIC_ROOT to the folder where collectstatic will put the collected static files:

Now collectstatic will be able to collect the static files from our frontend app correctly.

It's time to run collectstatic so open your terminal, navigate inside your project's root folder then run:

Luckily for us, Django provides a view function that uses the static folder as a templates folder:

So in your project's urls.py file add this route:

There is one another thing to do in order for our Angular app to be served correctly. Since the Angular app includes files from the root path, we need either to prefix them with /static/ or better yet add a redirect url to Django URLs to redirect them to /static/ whenever a request to a static file is made:

So we have seen how to integrate and serve the Angular app (in the front-end) with Django in the back-end in both the development and the production environments.

We have also seen how to use the Angular CLI proxy to solve the issues related to CORS and the Same Origin Policy when using two different domains (or actually two ports) in the development phase.